On 30 August the current batch of 5 startups of Next Media Accelerator gave their demo day pitches in Berlin.

Next Media Accelerator is a Startup accelerator based in Hamburg. It has been funded by 10 different big media companies, like Spiegel, Axel Springer, Gruner + Jahr, dpa and others. About a year ago, each of these big publishers put up EUR 200.000 to set up the program. It is targeted at Content Advertisement Technology Startups – they call it “CATS” 🙂 – that will work on the future of digital media. To be able to continue their successful work, Next Media Accelerator is now collecting money for the next fund. A participating startup can receive up to EUR 50.000, office space, mentoring and access to their network of media companies.

The first Batch that got the chance to participate in their program last year consisted of four Startups: Spotgun, spectrm, nqyer and adtriba. Apparently, three of these four startups managed to secure follow-up financing after leaving the Next Media Accelerator program – not bad!

Before the actual pitches started, there was a panel discussion about the past and future of online media with panelists from dpa (Christoph Dernbach), Netzpiloten (Wolfgang Macht), Axel Springer (Romanus Otte) and Edition F (Teresa Bücker). The older generation reflected on what it was like 20 years ago when the Internet started changing the media world forever and how it’s going to evolve in the future. 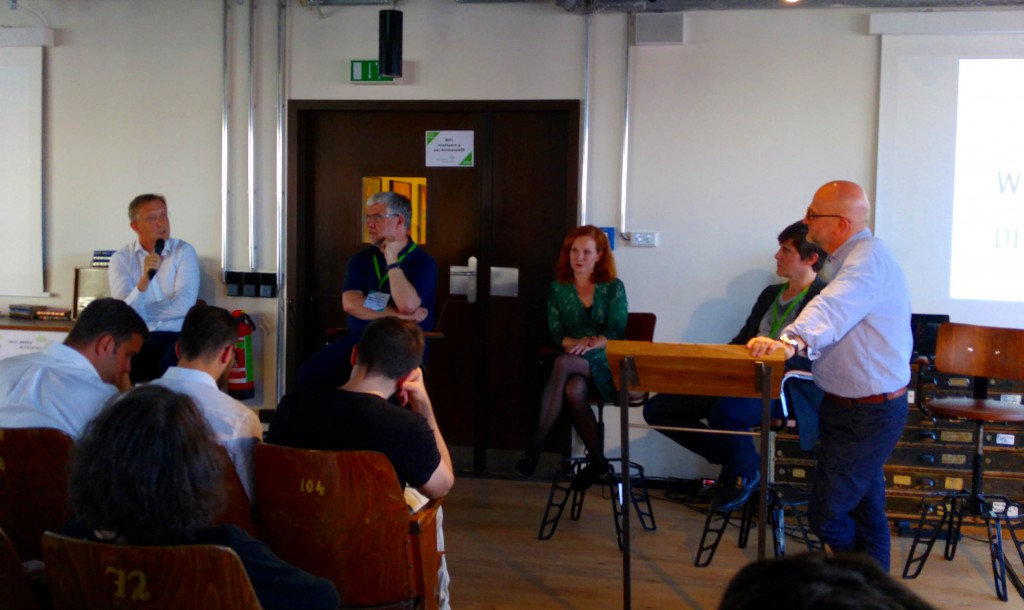 The current batch, that worked since March at refining their product and busines model in Hamburg, is now on stage in Berlin. Two days from now, they will repeat the demo day in Hamburg.

But now about how the startups were doing…

Bozhidar “Bobo” Georgiev tells us about his platform, that takes e.g. tweets from twitter, filters all the relevant information and makes you an eyewitness to an event taking place somewhere completely different. Well, not actually a real eyewitness, but it is going to give you enough information that – as a jounalist – you can then safely write a story about it.

As a case study, he talks about the Munich shootings. Only a few minutes after the first shots were fired, there were a number of tweets reporting just that. But only after a period of about half an hour did e.g. Reuters release their first story about it. Thus Yatrus Analytics is a technology company that provides text analytics software to monitor the social networks for relevant information in real-time as a service for journalists. The client can select his or her topics of interest. The platform applies machine learning technology. It is sold as a subscription. Yatrus Anlytics can analyse different languages. They compete with companies like dataminr and Banjo that analyze twitter messages for real time events as well.

Three guys started the company from their college dorm. The CEO Bobo put up EUR 250k himself as initial funding. They are now looking to raise EUR 1.0m as seed round.
Let’s go and find out what’s happening right now!

To me, the pitch was not entirely convincing. It is one side to notice a likely happening event, it is another to really be able (time and reliable sources) to write about it, with your credibility on the line. The competitors have not focused on news events, but rather opinions and trends – maybe for a good reason?

Vasilis Zoupas presented his opinion, that we need more participation in politics. The idea for WePolitics was born in 2014 in Greece. The team created a social platform around a politically interested community. On the platform it is made sure, that discussions remain structured and not develop into pages long threads of arguments and counter-arguments. Instead, they identify the most important arguments and present them only once. They use gaming mechanics to get higher user interaction.

Since each user gets points for contributing to a discussion, top influencers can be identified. The platform can be used as widget and integrated in other websites, e.g. news sites. During the time of the accelerator program, they have managed to sign up a German online newspaper and a Berlin politician to carry out polls and increase user interaction.

Competitors are mainly based in the USA: Brigade – the world’s first network for voters and icitizen – makes civic engagement easy.

To me, WePolitics seemed like a generally good idea and potential in their field. I’m not sure if it can address the problem of young people being tired of politics in general. But it can be a platform for the politically interested and in some cases decrease the threshold to think about political problems.

Jaime J Candau found out, that every year a loooot of movies are made. So, if you don’t know what to watch and where to watch it, you will face a tough choice. Their platform takes a large move database, adds a social layer with friends’ reommendations and rating and suggests new movies people liked that have a similar taste to yours.

The platform guides people from their first wish to watch a good film to the actual Video on Demand service where a confirmed purchase is made. The platform already works across different platforms and currently has 7k users who clicked 195k movie ratings. Through gamification and the social layer, users are encouranged to express their opinion on even more movies.

They are looking to get EUR 450k as seed round. After the end of the Next Media Accelerator program they will most likely return to Barcelona, their home town.

To me, the chances of actually winning a critical mass of users to make this platform take off seem small. However, if they really do make it, there are quite a number of ways that one could think of to monetize such a platform.

According to Narrativa’s CEO David Llorente, in 2020 about 90% of all online content will be generated by computers. Where a human can merely generate 2-4 narratives per day, their company’s AI Gabriele can do more than 1 million.

The software supports a number of languages. One application is that it transforms product specification spreadsheets into human-sounding text for an online shop. At the moment, they also offer automatic football game summaries. They charge a monthly fee of EUR 2-5k for unlimited narratives and do not plan to charge an on-boarding fee.

AX semantis is competitor, but according to them it has no AI. Currently, they address the market in Germany, the MENA region and Spain. David leads a team of four – mostly engineers.

To me, it seems that David is right about the number of texts that will be computer-generated in the future. I think they have a good product, but they need to maintain a technological lead in front of their competitors, as this domain does not seem like total rocket science.

PushApps has a team of four. In the time of the New Media Accelerator program, they have managed to sign on a number of clients like bento. Spiegel Online is supposed to follow in a few weeks. Rather impressive!

To me, the successes so far speaks for itself. The SaaS solution is in the end much more comfortable for publishers than to code all that themselves. I think that they will be successful (and hopefully they decrease the total number of push notifications that I receive in the future).

I am Arnas Bräutigam and I love Berlin and its startup scene. I am only a boring Sparkassen-guy, but I would like to be a help to all you young and hungry startup founders to better understand how banks thing and work. After seven years in the International Division of Landesbank Berlin and almost a year as Berliner Sparkasse's startup expert I have a few important and insightful stories to tell.